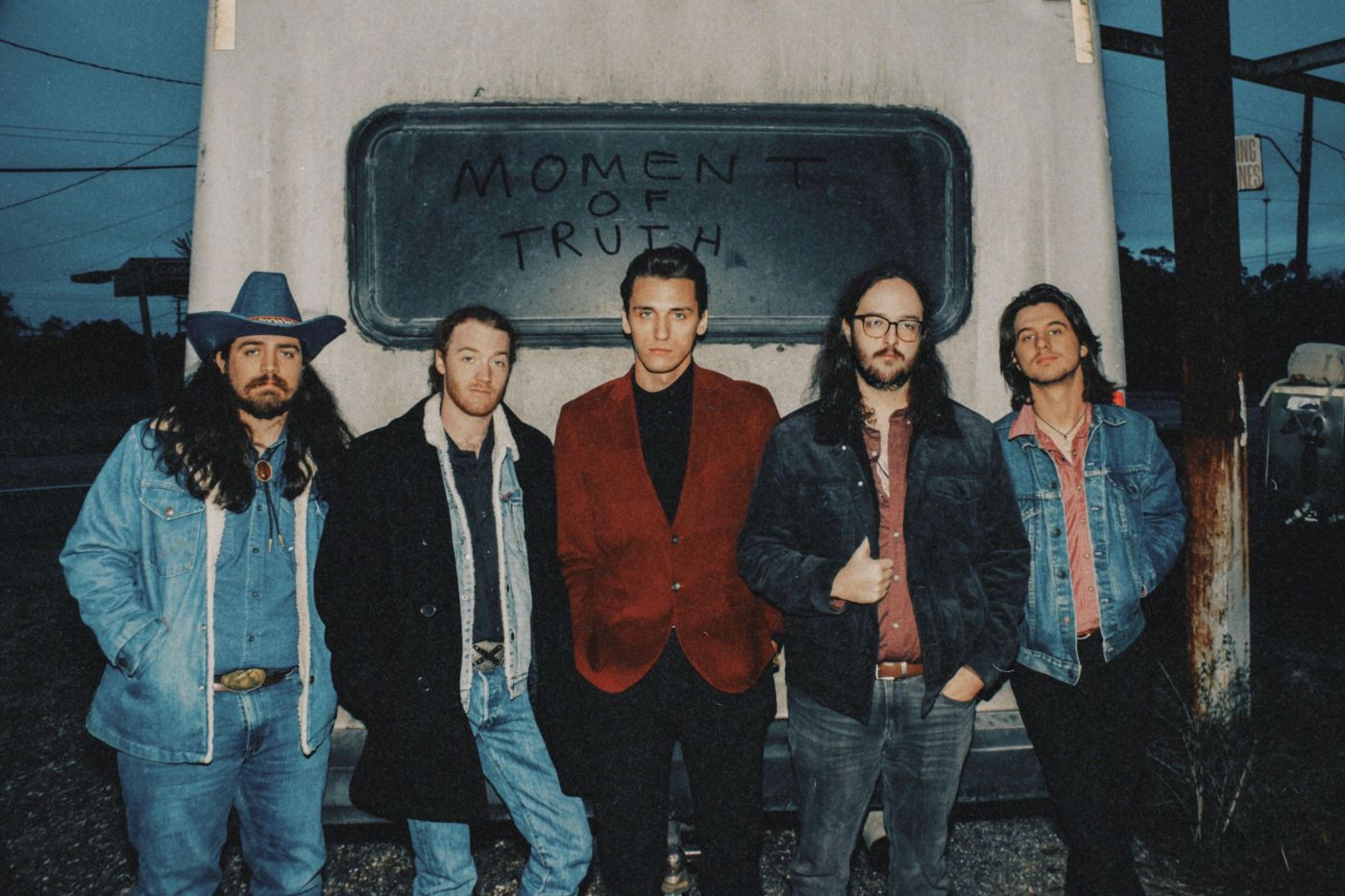 Every once in a great while I get sent music to listen to that just stops me in my tracks. I indeed lean toward traditional country when I seek out new music, but clever lyric writing is equally important. However, if you are lucky, you get something that is unique and new and different all while honoring the past.

Born and bred in the red dirt clay of south Alabama, Brandon Coleman (lead vocals/guitar), Drew Nix (vocals/electric guitar/harmonica), Zach Rishel (electric guitar), Andrew Bishop (bass), and John Hall (drums), blended their unique individualities and influences together to create a band with a rare sincerity that isn’t often seen in today’s industry. They forged to create music that contains the sounds of classic country, rockabilly, and gospel-fed soul mixed in with some sho’ nuff Delta blues.

Coleman explains how they first got together. “Me and Drew and Andrew got together in 2015 and we started a band that lasted a year or two. That band ran its course and at the tail end of 2016, we met John and Zach and formed ‘Red Clay Strays.’”

Their band name came from Bishop’s brother and it stuck. It aligns with the band’s roots coming out of the red clay of Alabama and strays because they all just sort of found each other coming from all different walks of life and backgrounds.

Their original tunes come mostly from Drew Nix and Brandon Coleman’s brother Matthew. Then the band comes together to bring the music to life in a manner that will set your soul on fire.

Nix states that the inspiration for the emotionally-packed songs comes from a lot of the people he has listened to over his life. “One of the first people I noticed how lyrically rich was Jason Isbell. I went down the rabbit hole from there and discovered people like Bob Dylan and John Prine, Merle Haggard, and Waylon Jennings. I didn’t really know what good music was until started being part of the band.”

He credits Coleman with introducing him to Lynyrd Skynyrd who had greatly guided them as they developed what their band would become.

“Everybody knows ‘Sweet Home Alabama’ and ‘Freebird’ but every song that Lynyrd Skynryd made was great. Even their demos are perfect.”

Nix continues, “We’re not really a jam band, we respect the composure of the music. I think that everything that Lynryd Skynryd did, every note they played, every beat had a rhyme and a reason for it. That has inspired us to make our music as purposeful as possible.”

The song “Good Godly Woman” was the first song of theirs that I heard. I hadn’t heard anything like it ever before. I realized that there was something more to this band than somebody who just wanted to sell records. You might not ever hear the song on terrestrial radio, but once you listen on whatever platform you use, you will be hooked as I was.

Songs previously released to YouTube include the fan favorites, “Falling” and “Getting Better.”

The guys admit they rarely listen to regular radio anymore. And with the power of social media and streaming services, the playing field has been leveled somewhat for these independent bands.

Their agent thought it might be a good idea if their fans help to fund their first record.

Recalls Bishop, “We were originally on a record label and it took us five years and getting off of that record label to make our debut album happen. We thought we’d get our fans involved and ended up raising $50,000 in the first week.”

Over the past five years, the fans have shaped the development of the Red Clay Strays.

They state, “Our fans are our record label. We have put everything into this album, our heart, our soul, our money. With the crowd-funding campaign, fans can be directly involved in the process.”

There were pretty surprised at how well things turned out. They have a loyal and dedicated fanbase even if they are mostly from the south.

Nix agrees, “We could play four or five shows in Mobile and a lot of those people would show up every day. People like it and it’s because what we have is authentic and not contrived. It comes straight from our guts and hearts.”

He explains further, “We literally are not trying to make these songs for the fans. I know that sounds selfish but we make music for ourselves. I hear songs in my head and it will drive me nuts until I get them out there.”

The Red Clay Strays recorded their album Moment of Truth in the traditional analog method in a private studio in Huntsville. Their producer had worked in Muscle Shoals and you can hear that influence in their recordings.

Although the title track to “Moment of Truth” is not to be missed, the band universally agrees that “Sunshine” is the favorite tune on the record. The song is as simple and light-filled as the title. The message-focused song hones in on what really matters in life and it leaves the listener in drug-filled tranquility created by the contemplative lyrics and the pure, intoxicating vocals of lead singer, Coleman.

Confirms Bishop, “I really like the way it came out on the record. The composing of it, I think we all just locked in on it. It really speaks to us.”

For the past five years, the Strays have been cutting their teeth in the Gulf Coast music scene while simultaneously running the roads around the U.S. They now have teamed up with bigger acts such as Midland with more soon to follow.

As many know, making good music doesn’t just come naturally. There is a lot of hard work and a little luck.

States Bishop, “There are a lot of people who are very talented, but they don’t have that drive to do it. You don’t have to be the best. Work ethic is a big part of it.”

With a tour schedule like they have, the Strays are one the hardest working bands you will find.

Lyrically, the Red Clay Strays’ songs are reminiscent of some of the great tunes that were birthed in the famed Laurel Canyon era. Stylistically, you can hear the influence of Lynryd Skynyrd and some Muscle Shoals as well. Yet, they are their own thing. They know what they are about and are unafraid to do whatever it takes to get to where ever they need to go.

Five years in the making, this debut album represents everything that the Strays are.

State the Strays, “The twelve songs on the record have a lot of moral fiber to them. Hopefully, when people hear the songs they will know that they are not alone or that they can party too.”

Make sure to download, stream and share the Red Clay Strays album, Moment of Truth. Then come back and thank me for introducing you to this one-of-kind, genre-bending band.