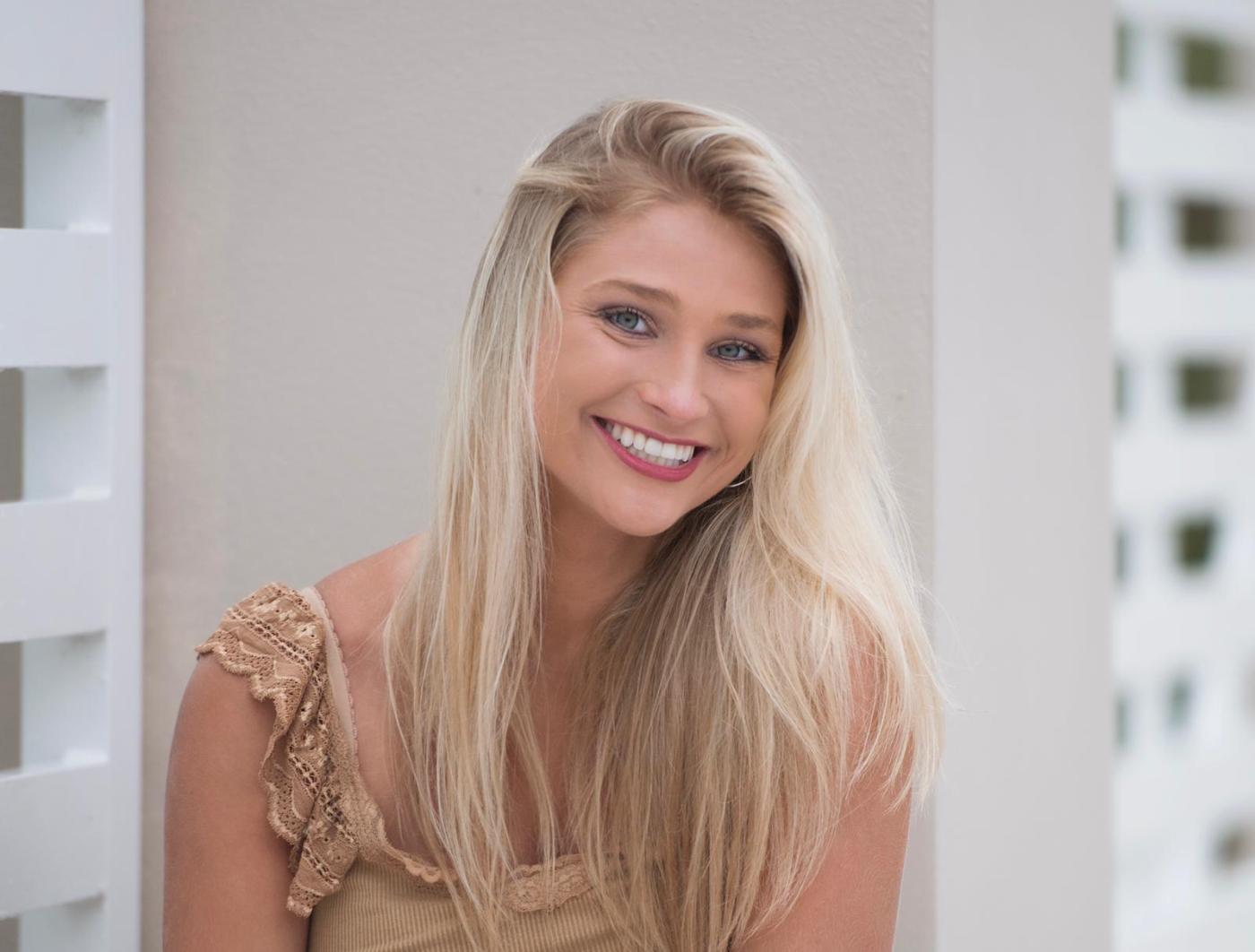 If there was ever an artist where the quote “Don’t judge a book by its cover” applied, Tiffany Ashton is that artist. Of course, she is pretty, vivacious and has great vocals, but honestly, so do a lot of aspiring artists who come to Music City. But there is so much more Tiffany’s story.

This self-made performer “just came out singing” as she explains. She started singing at church as a youngster and sang the National Anthem at a stadium when she was six-years-old. She was raised listening to and performing Christian Music, Classical and songs from Broadway but always loved singing Country Music the most. “My mama, from the time I can remember, had CMT playing on Saturday mornings when we were cleaning the house. So I grew up hearing all the greats of Country Music.” She always had a song in her heart and often imagined herself up there one day.

Not only that, she was/is a writer. As a child, Ashton would write poems and children’s stories. And then she would sing. But it wasn’t until she was about 11, she started to play guitar where she combined these two talents. “It was the bridge between two passions for me.” She began writing music about her life and what she was feeling. “It was like something connected for me and I have been going ever since,” she elucidates.

Although she grew up in Atlanta, Georgia, the family eventually moved to North Carolina to help find better support systems for her autistic brother (who also has severe epilepsy). While in North Carolina she attended The Arts Based School where she was taken under the wing by the Arts Director and Opera singer Mary Seibert and was classically trained.

Singing the classical music style was a great experience but as she clarifies, “It didn’t really give me a whole lot of room for my own self-expression like country music did. What I love about country music is that it is the story of everyday people. You turn on country music when you’ve had a bad day at work or a breakup because it talks about those real human emotions.”

Because she often sang with her church’s “praise team” she considered doing Christian Music for a little while. She has even written a few Christian songs. However, her friend and mentor Jason Hoard of Third Day told Ashton, “I can tell that your heart is in country music. If you are writing all these country songs, God has placed country music in your heart.”

Additionally, Ashton graduated Valedictorian at Atkins Academic & Technology High School in Winston-Salem. “What I love about engineering is what I love about songwriting. With engineering, you are supposed to design a solution for somebody else’s pain or problem. And in a very broad sense, that’s what we do with songwriting. You have a set number of chords, a set number of words, but the combinations you can use are infinite. I fell in love with the design process of engineering and it’s kind of like designing a song.”

For a long time, Ashton wrote songs solo, but knowing that Nashville is a hub for all songwriters, she has experimented in writing the ‘Nashville way.’ “When you sit down with an idea in your own head, there is a lot of internal conversation going on, but whenever you sit down with other writers, suddenly you are pulling from the experience of multiple people with a lot of ‘what ifs.’”

Ashton continues, “When you think about the songs that stop you in your tracks like George Jones’ He Stopped Loving Her Today and Miranda Lambert’s The House That Built Me, it’s because something in that song says something that has been inside of you for such a long time but you never had to words to say it yourself. When I write songs, I am always looking for that thing that my audience is going to hear and they are going to turn around and say ‘Wow!’”

Tiffany Ashton purposely created her own publishing company so she could have the rights to her own songs. This is a very big deal because of the uncertainty in the songwriting community regarding digital streaming rights.

Ashton has been going back and forth between Nashville since she was 15 and she currently attends UNC-Charlotte where she will graduate with an Economics degree in May. (The Engineering Department was not very accommodating to her music career.) Being knowledgeable about how money works gives her insight into the business side of the Music Industry. “I often wonder why does somebody buy a concert ticket as opposed to something else, why do they want to come to my show.” Hopefully, the main reason would be the connection they feel when she is on stage singing songs to which they can relate.

One of the first songs that Ashton wrote and released five years ago is a song called “Southern Sweetheart.” When asked if the song was about her she said, “It does have some autobiographical elements to it, but it is also the experience of growing up in a small town. The world pulls you in all kinds of directions sometimes, but you still have to come back to who you are.” That is why this song resonates with so many people of all ages.

Even though many her songs are often about guys (The Only Guy, Hey Country Boy) and relationships (Paradise You and Me, I’m On To You), she insists she not writing specifically about herself. “They’re about the underlying emotions underneath the story. The story is what takes you to that emotion, what you are feeling at that moment. Everybody experiences the big emotions; happiness, sadness, love, anger, and heartbreak. The words of a song can take you back to those places.”

However, the song “So Much Left to Say” is a complete departure from the normal themes of her songs. She explains that her autistic brother, Tristan, inspired this haunting song. “We were told with his condition that he would never speak and would have to be institutionalized.” They didn’t accept the diagnosis and moved to Winston-Salem, North Carolina, where he could receive the best services for someone with special needs. Being just 18 months younger than her, they are very close. But due to his epileptic seizures, he nearly died several times and during her senior year in high, she wrote the song one night when he was experiencing severe medical problems. Ashton reflects, “There are a lot of things we do in our everyday lives and we never think that this will be the last day that we may have with this person. We always bank on having a tomorrow. There are so many things left to say [to others] and we should be saying them now.”

A few years ago Ashton was named Nashville Universe’s “Rising Star 2018″ and “Best Country Artist” by the Hollywood Music and Media Awards, along with multiple regional awards. She is also a member of The Recording Academy and a Grammy voter. With award wins spanning coast to coast and a new EP released in 2019, Tiffany Ashton is “one to watch”.

Most recently Ashton played the Viper Room in Los Angeles and then sang the National Anthem for the Army-Navy game tailgate party which was co-sponsored by Nine Line Apparel and Barstool Sports. Partly because her grandfather was a Korean War veteran she has “a passion for veterans and what they have done for our country.” Being around her grandfather and hearing his stories gave her a big heart for those who protect our country. “We as Americans don’t fully understand how good we have it.”

Tiffany Ashton was also recently featured at Nashville’s Gaylord Opryland Hotel Big Night Nashville NYE Celebration with a full band where she was the midnight artist and part of the iconic New Year’s Eve countdown.

Until one month ago, Ashton managed herself and all her own projects but recently signed with John Lentz Management. Once she graduates UNC-Charlotte, Tiffany Ashton will move to Nashville permanently where she will continue with her music career. In the meantime, several of her songs will be featured in a soon-to-be released motion picture and she will be part of a TV reality show about the happenings in a guitar store where she will play herself.

After writing hundreds of songs and performing nationally, she has joined the bill with many artists including Brothers Osborne, Luke Combs, The Oak Ridge Boys, Corey Smith, Shenandoah, Bucky Covington, Brandi Cyrus, Cimorelli, Natalie Stovall, Nashville’s Kaitlin Doubleday, Lance Carpenter, Adam Sanders, Chasing Crazy, and Mac Powell of Third Day. “My passion has always been music,” Ashton says, “and to be able to do what I do and connect with people through my art is in itself a dream come true.

With college graduation in sight and many projects in the works, this is just the beginning for this busy and incredibly talented twenty-two-year-old. Stay tuned for part two of her remarkable story.