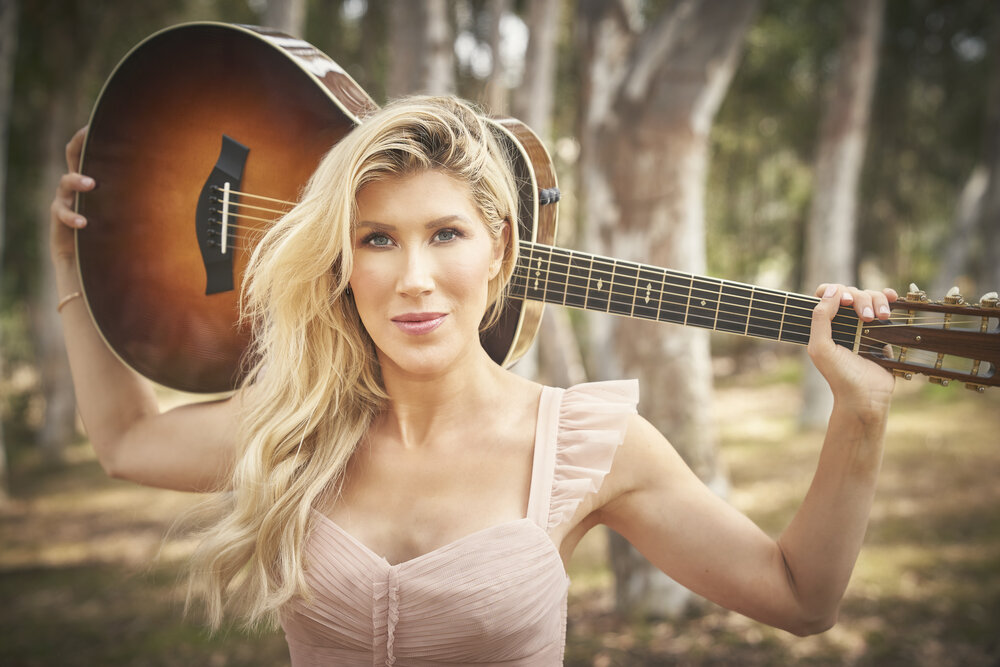 Before the release of her album, Canyon Road on July 9, I was sent a preview of a song “The Bottle.”  What I found was a heart-wrenching tale of struggle and survival. I knew at that time I wanted to interview the singer/songwriter Kimberly Dawn.

Besides being a musician, Kimberly Dawn is the mother of four children. Like so many artists I interview, Dawn grew up singing in church and always loved music. She took piano lessons as a child and played the flute but never saw music as a career. She grew up listening to all genres of music from Elvis Pressley, Paul Anka, and The Supremes to Glenn Campbell and eventually Garth Brooks.

“I loved his sound,” she recalls. She also listened to fellow Canadian, Shania Twain.

“I always loved country music from that point moving forward.”

At age 19, she moved from the family farm in Canada to Los Angeles to pursue music and acting full-time. Even though Dawn was singing and writing pop music, in her heart she always felt like she should be in country music.

However, at that time, she met her husband and got married, and had kids right away. So her pursuit of a music career got put on the back burner.

“By the time I was 30, I had four little kids. But at 30, I had this ‘aha’ moment. I was somebody before I was married, before I was a mom and I felt like I lost myself along the way. Even though being a mom was something I always wanted, I also came back to ‘Who is Kimberly?’ That is when music crept its way back into my life.”

The thirty-year-old jumped back into music, started taking piano lessons again, and eventually learned guitar. She even took guitar lessons over Zoom during COVID.

Five years ago, Dawn took the plunge and decided to pursue a country music career.

“It was always an easy fit for me because as a songwriter, I like to tell a story. So even my pop songs could be country songs because they tell a story. Yes, my stories may be a little different, but finding that country sound, it just feels like home to me.”

Music is Dawn’s passion and it helped her through life as well. She has always had a desire to help others. With her music, she feels like she can do so.

“Even if it’s one person who hears a song and they are having a hard day and they hear a song and that song lifts them up and it helps them through the day, then I am so grateful for that. That is the reason I write the song.”

From her previous album, Day and Night, the song “Nashville” is a catchy, fun song about a girl who is reminiscing about her time in Nashville. “The Warrior,” on the other hand, was inspired and written for anyone who has been bullied, or treated badly. She wanted listeners to feel hope and to know that “you will come out the other side stronger and a better version of yourself.”

Her newest album, Canyon Road, will appeal to a wide array of fans. The songs were written and recorded in Nashville with a variety of songwriters. The album features eight songs that not only put her raw talent on display but also showcase Dawn’s passionate storytelling abilities. Her soulful energy draws country fans of all kinds into her world. Canyon Road is no exception, as she continues to share her message of mental health wellness, resilience, and courage through music.

The music on Canyon Road is diverse with songs like a memorable, carefree “93” which transports one back to nineties’ country music. (Incidentally, the video for “93” was shot in the middle of COVID in their  backyard by her daughters on her iPhone.)

In contrast, the gut-wrenching, somber tune, “The Bottle” unapologetically addresses addiction. This beautiful, yet heavy-hearted song is very personal to Dawn’s story.

“I felt pulled to release this song as the next single and I’m glad I did as I’ve gotten a lot of good feedback and in different ways. The writer might have their own idea about what the song is about but the listener gets their own view on how that song makes them feel. And ultimately it’s helping people.”

“Canyon Road is not all one particular sound,” states Dawn.

You get songs like “The Bottle” featuring a guitar that has a traditional country melody along with a song called, ‘It’s With Me’ that is has more of a pop sound. And then there is ‘Front Porch’ which is about growing up in a small town and being on the front porch with your family and watching the sunset.

Even though the musician has written songs alone or in a co-write, she has found while coming to Nashville she loves the writers’ rounds with three (or more) people. She has embraced the “Nashville Way” of writing songs completely. Canyon Road was written in this way.

She confirms, “I am really proud of the songs and how they came out.” Producers Zach Abend and Jeff Cohen beautifully bring out the multi-facets of Dawn’s artistry in a professional and stimulating way.

“While music is my passion, it has also tested me and challenged me in many ways. Writing songs is therapy for me. Growing up, I remember listening to music and certain songs would give me that strength go on.”

Even as an adult, particular songs especially speak to her. Her songwriting is framed around helping others by telling her own stories as authentically as possible.

Not only are Dawn’s songs motivational, the mother of four beginning her music career as her children are on the cusp of adulthood, proves that it is never too late to follow your dreams.

She affirms, “There is no right or wrong way to do it. If you are passionate about something, and you want to do it, start now. It’s never too late. Women especially need to hear this.”

Country music speaks to so many people in an inspirational way or even in a fun way. Dawn concurs, “That’s the reason I love it so much. It just feels like home to me.”