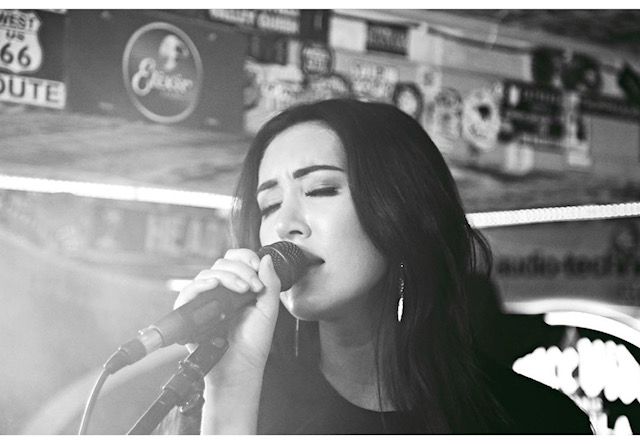 Even though everyone in her family is from Texas, this daughter of Country Music royalty was born in Nashville. Aubrie Sellers’ father is artist/songwriter Jason Sellers and her mother is Lee Ann Womack. Her step-father for most of life was/is Carnival Music owner/producer Frank Liddell.

Because music was in her bloodline, she knew from a young age that it would always be a part of her life. As with most young people, she had a “rebellious” side and she pursued acting as opposed to music. As a teen, she did take guitar lessons and learned the banjo. She was initially drawn the songwriting aspect of music. “I listened to all kinds of music then realized that I can do music that is my own style, my own thing and it’s OK and I won’t be walking in the footsteps of my parents too much.” She was 19 years old before she actually thought of writing songs with the intention of making a record.

Although she currently has a publishing deal, Sellers mainly writes for herself. There are instances where she has pitched some of her songs to other artists but she mainly writes with herself in mind.

Her debut album, New City Blues, was released in 2016 to critical acclaim where it was appropriately dubbed “Garage Country.” With songs like “Light of Day” and “Loveless Rolling Stone,” you definitely get the sound of a garage rock band, but with Sellers’ southern lilt, her country music influence can’t be denied. Any country music connoisseur would know exactly who she sounds like.

Sellers’ Opry Debut also came in 2016 where she sang a song she completely wrote by herself, “Losing Ground.” She explains, “When I write songs by myself the reason they are extra special is when people have a reaction to them. The Nashville way of writing songs is getting up and writing with others at 10:00 AM, but it feels a little more special when you sit down late at night and the song just pours out of you. People connect with that.”

While the norm is to move to Nashville to do country music, Aubrie Sellers moved to L.A. eighteen months ago. Since she was born in Nashville she has been surrounded by this same world her entire life. “With the last album, I toured and was out in the world and really grew up a lot. It felt like a natural next step for me to make sure that I’m being 100% myself and am able to get out of my environment and expand my horizons.” Also, her desire to act has not gone away so moving L.A. was a natural choice for her.

Although she has a very famous mother, she doesn’t bring it up in her shows. But sometimes people know already that she is Lee Ann Womack’s daughter. And sometimes people don’t know who she is but tell her, “You sound like Lee Ann Womack.” She continues, “That’s great because I love my mom and her music but obviously I want to make my own stance. It’s really special when people don’t know who I am or who my mom is and they just like my music.”

Her newest studio album Far From Home will be released on February 7th, 2020. The title track is a complete departure from the garage country sound of her last album. The song embraces her country roots with the simple subtleness reminiscent of Dolly Parton’s profound lyric writing. She states that like Dolly songs, all her songs come from a really personal place.

One very personal song on the new album is “Worried Mind” which was written because of anxiety issues she has experienced in the past. It is not the norm for a naturally introverted person to become a solo artist. She recalls, “When I first started touring it was just me and guitar player opening for another artist, it was really a struggle for me because I didn’t feel at home on stage at all.” The reason she wrote this song and shares her story is because she wanted to be able to help others experiencing the same thing.

But for those who love the grit of the garage-style band, Sellers does not disappoint with her surprise duet of “My Love Will Not Change” with rock, country and folk singer-songwriter, Steve Earle. Says Sellers, “I love his songs, I love his voice, I love his records.” She had a mutual friend ask Earle to sing the Del McCoury song with her and their different take on this bluegrass hit is nothing short of spectacular.

Aubrie Sellers will be touring with Tanya Tucker and Robert Earle Keen. >