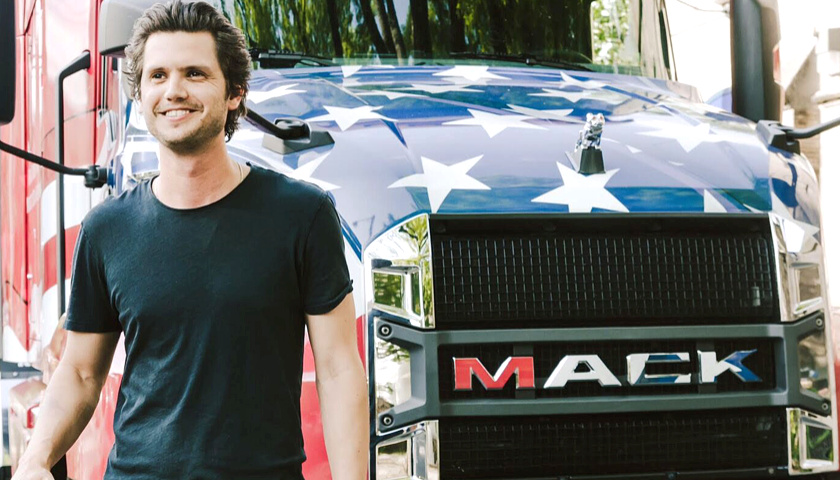 Nashville, TN — The first time I ever heard of Steve Moakler was when Sirius XM The Highway played his megahit “Suitcase” as a ‘Highway Find’ in 2016.  It turns out that Steve Moakler has been writing songs for a lot longer than that.  In addition to solo work, he has written or co-written music for artists including artists Dierks Bentley, Jake Owen, Eric Church, Kellie Pickler, Ben Rector and Matt Wertz. Most notably, he co-wrote Dierks Bentley’s 2015 single “Riser“. His music has also been featured on a variety of national commercials and networks including MTV, FOX, and ABC, and has songs featured on the motion picture October Baby.

On June 12, we joined Steve Moakler at the Ocean Way Studios in Nashville for the release of his fifth studio Album, Born Ready.  Because of his family connection to the trucking industry, Moakler was contacted by Mack Trucks to write an anthem for their new model, the Mack Anthem.

Moakler recounts, “It was cool to be asked to write [a trucker song] because for the past two years I’ve been on the road more than  I ever have in my life.  Our band has been across the country four times and we would pull our Mercedes Sprinter Van into a truck stop and park in between two semi trucks.”  They felt a kinship as they would eat, drink and shower alongside the truckers.

Once Moakler wrote the title track, Born Ready, he quickly realized that he was telling his own story too. It became the theme for the entire record.  “Whether your job has you behind the steering wheel or not, I think the road is a perfect metaphor for life. It’s about closing the distance between where you are and where you want to be. I hope the song inspires people to hang tough and to not turn around. That’s what it does for me.”

Since 2015, Moakler has been working with Luke Laird and Creative Nation Music.  States producer Laird, “[Steve Moakler] is so talented that I try not to mess up the heart that is in these songs.  Steve does his own thing. He is one of the best artists I’ve ever had the opportunity to work with.”  This coming from someone who has written and/or produced songs for Carrie Underwood, Blake Shelton, Trace Adkins, Sara Evan, Rodney Atkins, Eric Church, Little Big Town, Hunter Hayes, Eric Church, Luke Bryan, Tim McGraw, Rascal Flatts, Toby Keith, Chris Stapleton, John Legend, Jason Aldean, Miranda Lambert, Darius Rucker and many others.

Steve Moakler was born in New Jersey but moved to Pittsburgh when he was four years old. (Hence the inspiration for the 2017 album, Steeltown). He says he takes it as a compliment to be compared to a young, country version of  Bruce Springsteen.  Moakler moved to Nashville to attend Belmont College, but dropped out after two years to pursue music full-time.  Moakler has been married to his wife, Gracie for 5 years.  He stated after he got married, life wasn’t all about “doing what I love, but spending time with the one I love as well.”

Moakler’s 11-year career as a singer/songwriter would be envied by many much older.  However, the depth and maturity of the lyrics he writes often mirrors someone much older than his 30 years.  He embraces his roots blue-collar roots which helps to make his music more relevant to various age groups.

As for someone weary with the inundation of “Bro County” on the New Country airways, Steve Moakler and his record Born Ready is a breath of fresh air.

You can download Born Ready on iTunes or your favorite music app on June 15th.  To find out more about Steve Moakler and tour dates, you to his website: http://www.stevemoakler.com.