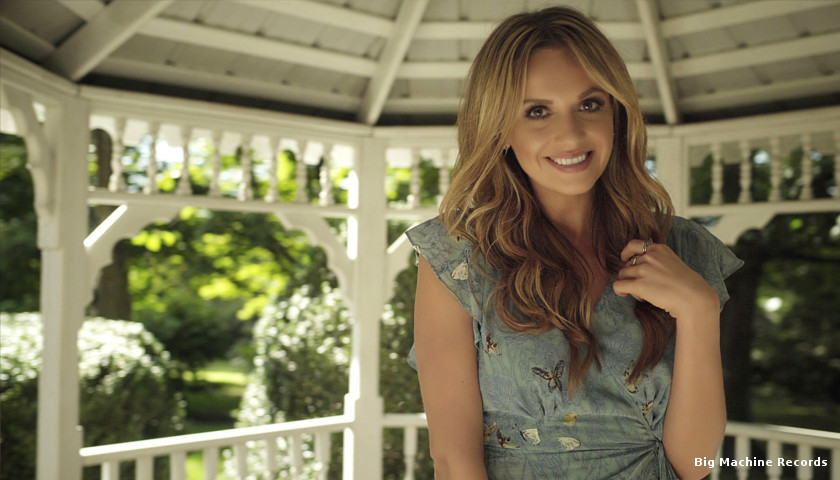 NASHVILLE, Tennessee–When I first thought there might be a possibility of getting an interview with Carly Pearce several weeks ago, she had one song on the radio, as she was one of the infamous “Highway Finds” on SiriusXM The Highway (new country). This past weekend, on Friday night (11/17), her Big Machine family surprised her during her set on Brett Young’s sold-out Calville Tour stop in Nashville at the Marathon Music Works with a commemorative plaque celebrating her first number one single, the gold-certified hit Every Little Thing.

Before country music traditionalists write Carly Pearce off as another sugary, pop-country singer, you need to actually listen to the songs on her debut record as she has written 8 of the 13 songs. In addition to the hit Every Little Thing, songs like If My Name Was Whiskey and I Need a Ride a Home show a depth and maturity often lacking from today’s younger country music stars. “Getting close, falling apart, being in love, bad boyfriends, crummy jobs, finding your way, second chances, enduring tenacity and people who understand are the essence of [the record] Every Little Thing. She also shows her witty side with lively songs like her 2nd release, Hide the Wine and Everybody Gonna Talk.

If anyone has ever “paid their dues,” Carly Pearce has. “All I truly ever wanted to do since I grew up in Kentucky is make country music.” She started out by fronting a bluegrass band at age 11. Then at 16, she tried out for Dollywood’s Show, Country Crossroads and convinced her parents to let finish school on her own and move to Pigeon Forge. “Performing at Dollywood was a key part of my journey to finding myself and finding my way.” After that she got gigs singing back-up for Lucy Hale and duetting with the Josh Abbot band all while cleaning Air BnBs to pay for an EP that she would later release on her own.

Moving to Nashville led to banging around on music row which often ended with Carly crying in her car. However, in 2015, Carly Pearce finally found an advocate in publisher, Daniel Lee. Daniel got “into my brain. He twisted and turned my thinking and we made this vision come to life.” Daniel introduced Carly to music industry executive, busbee, and they took a risk developing her into the artist they knew she eventually could be.  When Sirius radio executive J.R. Schumann was introduced to Carly Pearce, he insisted that Every Little Thing should be the song that was to be released as a “Highway Find.”  The night [Every Little Thing] went out, [it] grew “wings of its own.” The small ballad that “echoes with the hollow pump of a broken heart” was selling 6,000 copies a week.

In the year since Every Little Thing was released, Carly Pearce’s country music dreams have come true.  She recently experienced her first red carpet this November. Carly stated “[Being at the CMA’s] was every dream of one day attending the show as an artist that I had hoped for.  It was a big week for me because I was on the cusp of my first number one [hit].  It was really awesome to be able to walk the carpet and see from the side of being an artist what that was like.” Not only that, Carly Pearce has been added to Nashville’s Jack Daniel’s Music City New Year’s Eve lineup. “I am so excited to be a part of it this year and am really looking forward to being in good company with Keith Urban, Maren Morris and John Pardi,” surmised Carly.

She has never given up her heart’s desire to be “one of the females that you thought of when you think of country [music]. To think that maybe in a little way, I may be somebody who comes to your brain is the biggest honor.”  She continues, “I am the girl who never lost the fire of chasing that dream even though it took me a lot longer than I thought but it all worked out in the end.”  As she received her plaque Friday night she reminisced, “All I ever wanted to do is sing country music and I moved here 8 years ago with a dream and you [my fans] absolutely have changed everything for me this year.”  No doubt her life will be changed for many years to come as we anticipate hearing a lot more from Carly Pearce in the future.