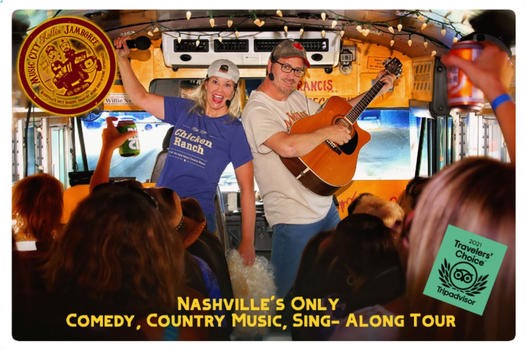 One thing that most native Nashvillians will tell you is to avoid the party buses. They are often full of young, drunk tourists are to be avoided at all costs.

However, when a publicist/friend told me about the Music City Rollin’ Jamboree, she advised, “It’s different.”

The multi-award-winning Music City Rollin’ Jamboree is a country music sing-along, comedy tour of Nashville, Tennessee. The show has been featured on several national TV programs including Good Morning America and HGTV’s Flip or Flop. The group has also garnered the prestigious Tripadvisor Hall of Fame Award and Traveler’s Choice Award as well as being voted the Number One Tour in Tennessee!

The owner and star of the Music City Rollin’ Jamboree is Jenny Carson. She got the idea to start her own bus tour over ten years ago while waiting in line for another party bus. There were just too many people who wanted to ride and not enough space for everyone.

She saw there was room for another Nashville tour/party bus. Carson didn’t know the first thing about running a tour bus business—no experience, not even a CDL license—and yet she bought a retired school bus and began to plan her future. The inaugural year of the Music City Rollin’ Jamboree saw Jenny grabbing up people on Broadway, making them laugh, and pointing out historical landmarks—all while driving the bus!

Carson is a Nashville native. And the truth is some would think she crosses the line with her suggestive style of humor. You’d think people might get offended or storm off mad—but they wait for pictures and hugs after the show. And, come back and ride again on their next trip to town.

Eight-time Canadian Country Music Association (CCMA) nominee and CCMA “Male Vocalist of the Year” and “Record Producer of the Year” winner, Gil Grand rides along to provide the musical entertainment. He is the perfect wingman to Carson’s zaniness.

Major celebrities like Reba, Kelly Clarkson, and Melissa Peterman have all made appearances on the Jamboree bus. The website says (and it’s so true): If you don’t like attention, great music, or irreverent comedy, this isn’t the ride for you. But if you like cutting loose, singing loudly and belly laughing with your loved ones get a ticket – this is one show you won’t forget.

I’ll be honest, this age 21+ tour is a little raunchy and not recommended for the faint of heart. However, I have never laughed so hard in a long, long time. And I even learned a little about the history of Nashville all while having a rollicking, good time.

In this world of political correctness, jokester Jenny Carson is a breath of fresh air. She goes there. But when you offend everyone equally, no one feels left out.

So, get ready to grab a drink, kick back, sing along and experience the talents of your hosts…a Grammy Award-winning singer and a quick-witted bawdy comedian who believes nothing is too much. This show is a “must-do” for tourists and locals alike! Get your seats early, they sell out regularly.

The Music City Rollin’ Jamboree is celebrating its 10th anniversary in 2022. It consistently stays sold out every weekend with (majority of the time) two shows Wednesday—Saturday at 11:30 am & 1:30 pm.