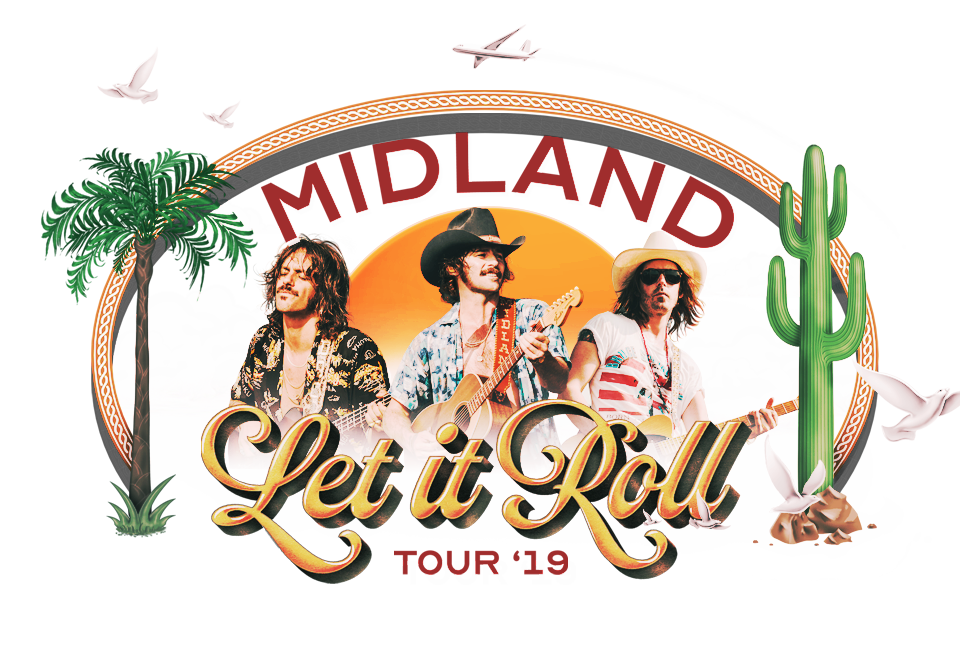 Double GRAMMY® nominees Midland return with LET IT ROLL, their second critically lauded project. Recorded in four different cities in the throes of “a tour that will never end,” the hard-working trio cited by The New York Times for their “retro country elegance” arrives with major features on Rolling Stone, Esquire and NPR, which afforded the album a rare “First Listen.”

As their rockabilly-leaning lothario  “Mr. Lonely” scales country radio, Entertainment Weekly assessed Midland’s progression as “a natural extension of its acclaimed 2017 debut ON THE ROCKS. Every element is rooted a little deeper: the lyrical imagery, the crispness of the instrumentation, and the harmonies of members Mark Wystrach, Jess Carson, and Cameron Duddy that toggle between pristine precision and gloriously raggedy edges…”

For Rolling Stone’s significant feature, the band looked deep into their inspiration, process and commitment.  Beyond time spent touring Nashville in Midland’s signature ‘70s pink limo, contributor Marissa Moss found the trio’s sound, “like a road trip soundtracked by the Allman Brothers and really good weed. The harmonies are warm and exact, with Wystrach’s Keith Whitley-esque vocals deep and sometimes rolling into a tongue-in-cheek growl, to remind us that music is also supposed to be fun. It’s a fully realized and seriously executed work that’s never entirely serious… There are echoes of Chris Isaak, and California sheen…classic country cheating songs, but with a different perspective: sexy, too, and a little sleazy.”

Having spent the past few years focused on the road, largely headlining their own dates as well as opening for Dwight Yoakam, George Strait, Garth Brooks and Little Big Town, the central reality – as noted in The Tennessean’s headline is “Midland tackles credibility, tension and intimacy.” That commitment will be on full display August 28 on NBC‘s Today Show for a plaza appearance, then Sept. 17 when they kick off their LET IT ROLL Tour at NYC’s Terminal 5.

“It’s been a crazy couple years,” says bassist/songwriter/vocalist Cam. “We knew when we put it all out there, music was all there was. We can’t look back, because there’s so much ahead.”

If a picture’s worth a thousand words – and given the spreads in unlikely venues from from Esquire to Women’s Wear Daily, then a video is an entire volume. Watch their Buck Owens’ feeling “Playboys,” and understand their passion for – and commitment to – the old school classic country way of taking the road.

Lead singer/guitarist Mark Wystrach, lead guitarist/vocalist Jess Carson and bassist/vocalist Cameron Duddy are just doing what they know. Having again teamed with the esteemed production superteam of Dann Huff, Shane McAnally and Josh Osborne, Let It Roll may be the understatement of the year. At a time when country seems to be leaning back into its ‘70s and ‘90s roots, Midland continues deeper onto the path they’ve blazed since dropping “Drinkin’ Problem.” They’ve just leaned even deeper into the kind of classic Country themes that embrace moral weakness, carnal pleasure and the way nothing soothes a rubbed raw reckoning like a jukebox song.

Link to Let it Roll.