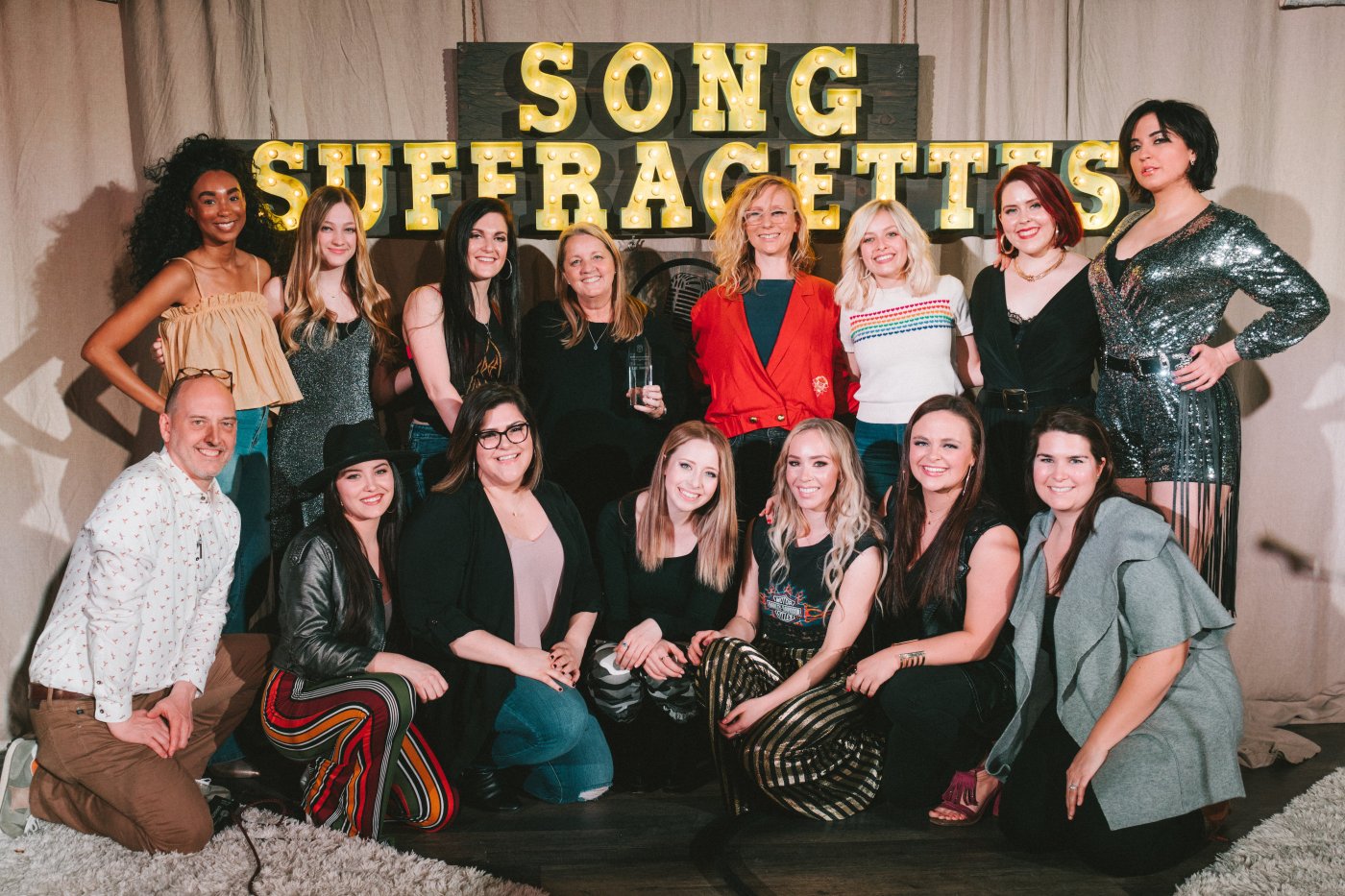 On Monday, Nashville’s all-female, singer-songwriter collective, Song Suffragettes, celebrated their milestone fifth anniversary with two rounds featuring 11 women singer-songwriters and a special presentation to Grammy, CMA and ACM award winning songwriter and publishing icon, Liz Rose. Rose accepted the inaugural “Yellow Rose of Inspiration Award” for her contributions to the songwriting community including writing and publishing many of the songs that have inspired the over 200 women who have performed on the Song Suffragettes stage through the years. 11 of those women were featured Monday, in front of a sold-out crowd at The Listening Room, including Kalie Shorr, Candi Carpenter, Tiera, Sarah DeFors, Kasey Tyndall, Savannah Keyes, Livy Jeanne, Michelle Pereira, Stevie Woodward, Caroline Watkins and 14-year-old prodigy Mia Morris on cajon.

In addition to the rounds and award presentation, NPR’s Jewly Hight moderated a Q and A with Liz Rose, diving into her storied career and journey through publishing and into songwriting.

The evening capped off one of the biggest years of the critically-acclaimed collective. Last year, they released the original song and music video for “Time’s Up”, a musical nod to the female empowerment movement. The song went on to receive major media coverage, critical accolades and ultimately raised $10,000 for the Time’s Up Legal Defense Fund through single sales and streaming.

After the song and video were released, the intense media coverage including the Associated Press, USA Today, Washington Post, San Francisco Chronicle, Voice of America, U.S. News & World Report, Billboard, Rolling Stone, CMT.com, TasteOfCountry.com, SoundsLikeNashville.com and Grammy.com. Most recently, the song was one of sixteen songs featured on TuneIn’s Country Roads “Fab Females of 2018” radio special. TheShotgunSeat.com named the song one of the Top 20 Singles of 2018 calling it “arguably the most important song released in 2018.”

About Song Suffragettes
Song Suffragettes is a collective of female singer-songwriters that performs every Monday night at The Listening Room Café in Nashville, Tenn. In just five years, Song Suffragettes has showcased over 200 talented women out of over 1,350 who have submitted to play the showcase. With weekly sell-outs and a mantra of #LetTheGirlsPlay, Song Suffragettes vocally combats widespread discrimination against women in the music industry by giving female talent a place to play, grow and evolve with fellow creatives. Since its inception, 11 Song Suffragettes women have gone on to receive record deals and 40 have landed music publishing deals. With over 2.4 million views on their YouTube channel, Song Suffragettes was recently named by Billboard magazine as one of “Next-Gen Nashville: 16 People, Places and Things Shaking Up Music City”. Featured in Elle, USA Today, Washington Post, Grammy.com, Boston Globe and more, Song Suffragettes continues to fight for female talent to be heard throughout the country and beyond.